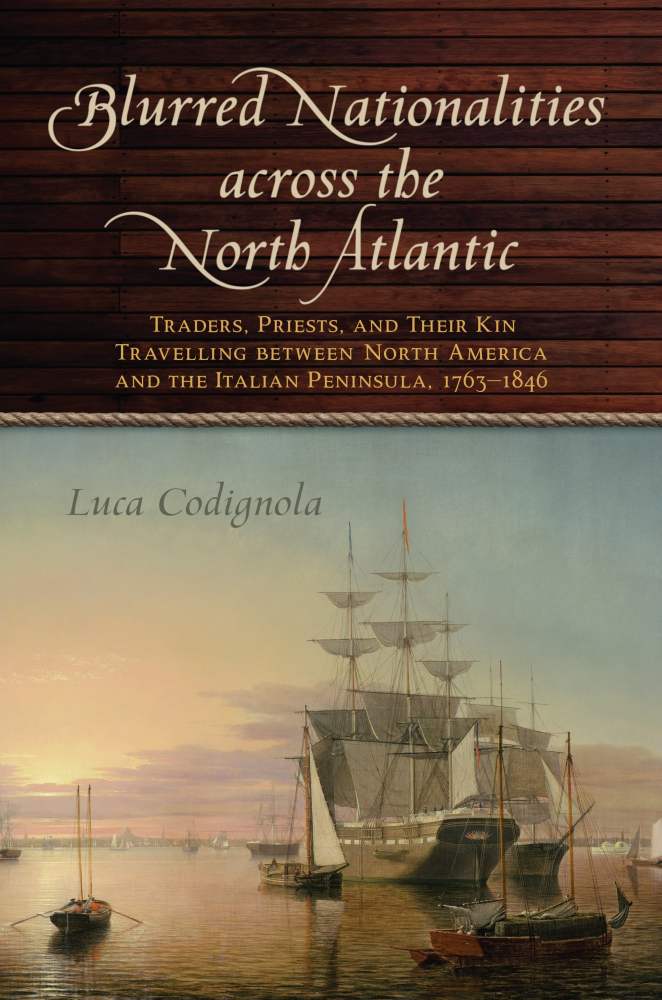 This summer, we highlight three books written by CCHA members:

Luca Codignola, senior fellow at the University of Notre Dame, adjunct professor at Saint Mary’s University, Halifax, and professeur associé at Université de Montréal, has published Blurred Nationalities across the North Atlantic, a study of the people who plied the eighteenth- and nineteenth-century transatlantic merchant routes between Italy and North America.

Peter Ludlow, CCHA president and adjust professor at St. Francis Xavier University, has published The Canny Scot, a biography of Archbishop James Morrison of Antigonish, the leader of the progressive social active movement known as the “Antigonish Movement.”

Synopsis: Long before the mid-nineteenth century, thousands of people were frequently moving between North America – specifically, the United States and British North America – and Leghorn, Genoa, Naples, Rome, Sicily, Piedmont, Lombardy, Venice, and Trieste. Predominantly traders, sailors, transient workers, Catholic priests, and seminarians, this group relied on the exchange of goods across the Atlantic to solidify transatlantic relations; during this period, stories about the New World passed between travellers through word of mouth and letter writing.

Blurred Nationalities across the North Atlantic challenges the idea that national origin – for instance, Italianness – constitutes the only significant feature of a group’s identity, revealing instead the multifaceted personalities of the people involved in these exchanges.

Synopsis: The year 2015 marked the fiftieth anniversary of the end of the Second Vatican Council, which aimed to align the Church with the modern world. Over the last five decades, women religious have engaged with the council’s reforms with unprecedented enthusiasm, far exceeding the expectations of the Church.

Addressing how Canadian women religious envisioned and lived out the changes in religious life brought on by a pluralistic and secularizing world, Vatican II and Beyond analyzes the national organization of female and male congregations, the Canadian Religious Conference, and the lives of two individual sisters: visionary congregational leader Alice Trudeau and social justice activist Mary Alban. This book focuses on the new transnational networks, feminist concepts, professionalization of religious life, and complex political landscapes that emerged during this period of drastic transition as women religious sought to reconstruct identities, redefine roles, and signify vision and mission at both the personal and collective levels.

Following women religious as they encountered new meanings of faith in their congregations, the Church, and society at large, Vatican II and Beyond demonstrates that the search for a renewed vision was not just a response to secularization, but a way to be reborn as Catholic women.

Synopsis: A paradoxical prelate to many, Archbishop James Morrison was the spiritual head of the Roman Catholic Diocese of Antigonish, Nova Scotia, from 1912 to 1950. Traditional, frugal, and aloof, he was also the ecclesiastical leader of a progressive program of Catholic social action that became known as the “Antigonish Movement.”

Elevated to bishop after a successful clerical career in Prince Edward Island, Morrison guided Catholics in eastern Nova Scotia through difficult periods of economic decline, out-migration, and war. He was unprepared for the challenges of twentieth-century Canadian society, and initially struggled to cope with a dwindling Maritime economy, labour unrest, and rural depopulation. Determined to maintain the stature of his diocese, Morrison cautiously supported the clergy reformers who wanted a program of adult education and economic reform. Peter Ludlow unravels the mystery of this figure to show that although Morrison was one of the last powerful and austere Canadian Roman Catholic prelates, he was also one of the first to recognize that the Church could offer its adherents more than spiritual guidance.

A revisionist account of the foundation and application of the Antigonish Movement, The Canny Scot illustrates the important role of the Catholic Church in Nova Scotia.

Fr. Edward Jackman, Longtime CCHA Secretary-General, Dies at Age 81
June 18, 2021
RECENT BOOKS FROM CCHA MEMBERS
Disciples of Antigonish: Catholics in Nova Scotia, 1880–1960
Peter Ludlow
In his second book, expected September 2022 from McGill-Queens University Press, Peter Ludlow examines one of the most celebrated Roman Catholic constituencies in Canada. Occupying a corner of a small province in a politically marginalized region of the country, the Diocese of Antigonish nevertheless had tremendous influence over the development of Canadian Catholicism. It produced the first Roman Catholic prime minister of Canada, supplied the nation with clergy and women- religious, and organized one of North America’s most successful social movements.
The Sisters of Our Lady of the Missions: From Ultramontane Origins to a New Cosmology
Rosa Bruno-Jofré
Drawing from research in Canada, England, and Italy, Bruno-Jofré's latest work traces the journey taken by the Canadian Province of the Sisters of Our Lady of the Missions from its establishment in Manitoba in 1898, up to 2008, when the congregation redefined its mission and vision.
Ireland's Empire: The Roman Catholic Church in the English-Speaking World, 1829–1914