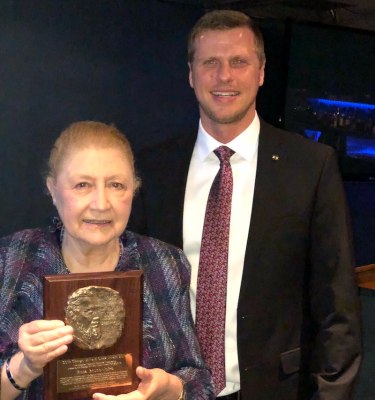 A professor and former dean (2000-2010) of the Faculty of Education, cross-appointed to the Department of History, Faculty of Arts and Sciences, Queen’s University, Kingston, Dr. Rosa Bruno-Jofré was honoured with the 2018 G.E. Clerk Award, the Canadian Catholic Historical Association’s annual prize for excellence in Catholic studies. Dr. Bruno-Jofré has published on the history of women religious, history of education, and educational theory from a historical perspective. Throughout her distinguished career, Bruno-Jofré has published and lectured on the history of Canada’s women-religious, Canadian Catholic education, and Latin America.

News of the Clerk Award was received warmly by Dr. Bruno-Jofré’s employer Queen’s University, Kingston. “On behalf of myself and the Queen’s Faculty of Education,” notes Dean Dr. Rebecca Luce-Kapler, “I would like to extend congratulations to Dr. Rosa Bruno-Jofré. This award demonstrates Rosa’s record of excellence in research and teaching. An eminent scholar in both education and history, Rosa’s passion, meticulous research, and commitment is an invaluable asset to the University, the Faculty, and her students.

President-general of the CCHA, Dr. Peter Baltutis, echoes these thoughts: “the Canadian Catholic Historical Association has benefited immeasurably from Dr. Bruno-Jofre’s scholarship and service, and, as importantly, the association continues to benefit from her professionalism and collegiality.”

About the Clerk Award

George Edward Clerk (1815-1875) was a prominent Montreal Catholic and editor of that City’s True Witness and Catholic Chronicle. A Scottish Canadian who had a bright and inquisitive mind, Clerk accepted Bishop Bourget’s challenge to launch an English-speaking Catholic newspaper which would deal with the anti-Catholic aspersions of the Montreal Witness. Clerk’s warm heart and sharp mind gained his newspaper much respect. His service of the written word lives on as the Canadian Catholic Historical Association presents the George Edward Clerk Award to outstanding Canadian historians for their contributions to Catholic history.

The Canadian Catholic Historical Association commissioned William McElcheran in 1973 to design a mold to cast the original ten commemorative medallions in memory of G. E. Clerk. Some of McElcheran’s life-size sculptures stand on the campus of St Michael’s College at the University of Toronto. A second series of medallions were cast in 2001 through the courtesy of the Kinsman Robinson Galleries of Yorkville.

The CCHA awards medallions to scholars who have distinguished themselves in Catholic studies, publishing, teaching, archival work, or administration. The past recipients of the award include:

Dr. Bruno-Jofré qualified in all of the following categories:

1. Excellence in writing or researching the history of Catholics and the Catholic Church.

2. Service to the administration of the CCHA/SCHEC: planning conferences, special events, and editing manuscripts.

3. Excellence in the field of Catholic archives or teaching Catholic history.