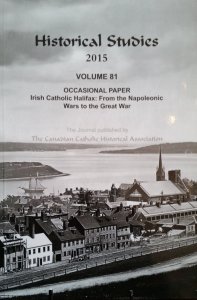 The second of Historical Studies – Volume 81- An Occasional Paper

Irish Catholic Halifax: From the Napoleonic Wars to the Great War

All members of the CCHA and contributing authors have a received this special edition of Historical Studies.  A joint collaboration of the Canadian Catholic Historical Association (CCHA) and the Social Sciences and Humanities Research Council (SSHRC) and Saint Mary’s University in Halifax, Nova Scotia ensured a thorough.investigation of the Irish Catholic community in Halifax.  “…scholars represented in this volume were part of a research team that spanned two continents and represented at least eight universities.”, quoted from the Editors Introduction as written by Mark G. McGowan (University of Toronto), Principal Investigator, Co-Editor and Michael E. Vance (St. Mary’s University), Co-Editor.

Papers presented within the “Historical Studies 2015 Volume 81 Occasional Paper Irish Catholic Halifax: From the Napoleonic Wars to the Great War” was taken in part from a special “IRISH DAY” celebration of the Canadian Catholic Historical Association conference held in May of 2014.  An announcement of the symposium of authors, their respective universities and the line up of paper titles can he seen here.  Most of the authors present were also part of the group photo on this page.