Update on the Symposium of Irish Catholicism – May, 2014

In May of 2014, The Canadian Catholic Historical Association (CCHA) hosted a day-long symposium on Irish Catholicism in 19th Century Halifax.  Presentations were made by the Research Team working on the SSHRC-funded project, “Irish‐Catholic Discourse and Social Mobility in Nineteenth Century Halifax: the Exemplary Case of Holy Cross Cemetery.”  The CCHA presented this symposium in conjunction with its partners from St. Mary’s University and the Holy Cross Trust 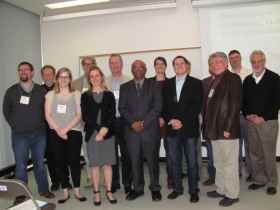 Mark McGowan (University of Toronto) The Irish Catholics of Halifax and the Empire’s Wars, 1899-1918

Deceased Members of the CCHA
April 21, 2020
FULL CANCELLATION OF CONGRESS 2020
April 2, 2020
RECENT BOOKS FROM CCHA MEMBERS
The Summer Trade: a History of Tourism on Prince Edward Island
Alan MacEachern and George Edward MacDonald
Spanning from the Victorian era to the COVID-19 pandemic, The Summer Trade presents the first comprehensive history of tourism in any Canadian province. Over time the Island has marketed a remarkably durable set of tourism tropes - seaside refuge from urban industrial angst, return to innocence, literary shrine to L.M. Montgomery, cradle of Confederation, garden of the Gulf.
Christianity in India: The Anti-Colonial Turn
Clara A.B. Joseph
By studying the history and sources of the Thomas Christians of India, a community of pre-colonial Christian heritage, this book revisits the assumption that Christianity is Western and colonial and that Christians in the non-West are products of colonial and post-colonial missionaries. Christians in the East have had a difficult time getting heard—let alone understood–as anti-colonial.
Disciples of Antigonish: Catholics in Nova Scotia, 1880–1960
Peter Ludlow
In his second book, expected September 2022 from McGill-Queens University Press, Peter Ludlow examines one of the most celebrated Roman Catholic constituencies in Canada. Occupying a corner of a small province in a politically marginalized region of the country, the Diocese of Antigonish nevertheless had tremendous influence over the development of Canadian Catholicism. It produced the first Roman Catholic prime minister of Canada, supplied the nation with clergy and women- religious, and organized one of North America’s most successful social movements.
Go to Top