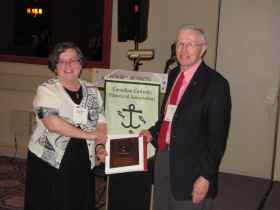 George Edward Clerk (1815-1875) was a prominent Montreal Catholic and editor of that City’s True Witness and Catholic Chronicle. A Scottish Canadian who had a bright and inquisitive mind, Clerk accepted Bishop Bourget’s challenge to launch an English speaking Catholic newspaper which would deal with the anti-Catholic aspersions of the Montreal Witness. Clerk’s warm heart and sharp mind gained his newspaper much respect. His service of the written word lives on as the Canadian Catholic Historical Association presents the George Edward Clerk Award to outstanding Canadian historians for their contributions to Catholic history.

The Canadian Catholic Historical Association commissioned William McElcheran in 1973 to design a mold to cast the original ten commemorative medallions in memory of G. E. Clerk. Some of McElcheran’s life-size sculptures stand on the campus of St Michael’s Collegeat the University of Toronto. A second series of medallions were cast in 2001 through the courtesy of the Kinsman Robinson Galleries of Yorkville.

The CCHA awards medallions to scholars who have distinguished themselves in Catholic studies, publishing, teaching, archival work, or administration. The past recipients of the award include:

The selection committee asks you to send in the name of a person you would like to nominate for the Clerk Award 2014. The Clerk Medallion will be presented at the annual CCHA dinner in May at Concordia University. Please send your nomination by 31 January 2014 to the Selection Committee whose addresses are listed below.

The nominee will qualify for the award under one of the following categories:

1. Excellence in writing or researching the history of Catholics and the Catholic Church.

2. Service to the administration of the CCHA/SCHEC: planning conferences, special events, and editing manuscripts.

3. Excellence in the field of Catholic archives or teaching Catholic history.

CCHA Members earn distinguished awards
December 20, 2017
G.E. Clerk Award: Call for Nominations
December 7, 2017
RECENT BOOKS FROM CCHA MEMBERS
The Summer Trade: a History of Tourism on Prince Edward Island
Alan MacEachern and George Edward MacDonald
Spanning from the Victorian era to the COVID-19 pandemic, The Summer Trade presents the first comprehensive history of tourism in any Canadian province. Over time the Island has marketed a remarkably durable set of tourism tropes - seaside refuge from urban industrial angst, return to innocence, literary shrine to L.M. Montgomery, cradle of Confederation, garden of the Gulf.
Christianity in India: The Anti-Colonial Turn
Clara A.B. Joseph
By studying the history and sources of the Thomas Christians of India, a community of pre-colonial Christian heritage, this book revisits the assumption that Christianity is Western and colonial and that Christians in the non-West are products of colonial and post-colonial missionaries. Christians in the East have had a difficult time getting heard—let alone understood–as anti-colonial.
Disciples of Antigonish: Catholics in Nova Scotia, 1880–1960
Peter Ludlow
In his second book, expected September 2022 from McGill-Queens University Press, Peter Ludlow examines one of the most celebrated Roman Catholic constituencies in Canada. Occupying a corner of a small province in a politically marginalized region of the country, the Diocese of Antigonish nevertheless had tremendous influence over the development of Canadian Catholicism. It produced the first Roman Catholic prime minister of Canada, supplied the nation with clergy and women- religious, and organized one of North America’s most successful social movements.
Go to Top