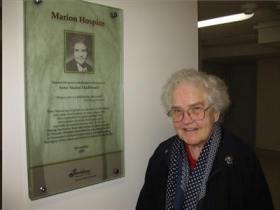 Sister Marion MacDonald in 2005 at the opening of the Marion Hospice in Vancouver, named in her honour.

Sister Marion E. MacDonald of the Sisters of Charity of the Immaculate Conception was born in Saskatoon, Saskatchewan in 1920. Her parents, Bernard and Marion (Egan) MacDonald, had moved west from Prince Edward Island. They sent her to local Catholic and public schools except for her Grade XII year which she completed at St Joseph’s Convent in Rosetown. Marion chose to train as a nurse at Holy Family Hospital in Prince Albert. She worked in the west for two years before entering the Novitiate of the Sisters of Charity of the Immaculate Conception in Saint John NB in 1944. After her profession as Sister Mary Loretto, she studied for her Bachelor of Science in Nursing at St Francis Xavier University in Antigonish, NS, and her Masters in Hospital Administration in St Louis, Missouri. Sister taught and administered at Holy Family School of Nursing in Prince Albert. From 1953 to 1957 she served as Assistant Administrator at St Joseph’s Hospital, Saint John, taking part in the building of a new hospital and the school of nursing.

From 1957 to 1980 Sister Marion MacDonald directed St Vincent’s Hospital in Vancouver. She oversaw the development of extended care and geriatric psychiatric services while serving on health care boards and committees. As well, Sister was a traveling member of her congregation’s general council, going to meetings in Prince Albert and Saint John. In 1980 and again in 1990 she was elected to that council and served as the Vicar General responsible for health care institutions of the congregation. In St John she founded the Single Parent Resource Centre, now the Family Resource Centre. She directed the Ruth Ross Residence, bringing changes for the welfare of her Sisters.

In 1998 Sister Marion MacDonald retired to Vancouver, taking up volunteer work at St Vincent’s Hospital as well as with the RCIA at Holy Name Parish. Sister served on boards including the Tapestry Foundation for Health Care. In 2005 the hospice at Windermere Care Centre, operated by Providence Health Care, was named the Marion Hospice in honor of her contributions. In 2011 Sister Marion returned again to Saint John to live at the Ruth Ross Residence. She passed away there November 15, 2012.

In 2008 when I was writing a history of the Archdiocese of Vancouver, a non-Catholic academic recommended I consult Sister Marion MacDonald on the development of Catholic health care. Sister gave me valuable insights on the contributions of religious congregations of women in hospitals and in the community. For example, her congregation, the Sisters of Charity of the Immaculate Conception, came to 9 Spring 2013 ISSN 1182-9214 Volume XXVII, Number 1 Vancouver in the late 1920s to teach in parochial schools and nurse in hospitals. They also helped pioneer an inner-city health clinic in the 1930s and the changeover from religious to lay hospital administration fifty years later.

Sister Marion’s life story shows how Sisters brought vision, energy and skills from the Maritimes and the Prairies to Catholic and public health care in British Columbia, and shared western developments with Maritime health care providers. Many people were blessed by Sister Marion’s vision, determination and generosity. Her biography reminds historians of the role of religious women in the evolution of Canadian medicare and that we ought to be writing about that.

Thanks to Elizabeth McGahan in Saint John NB for providing me with the Witness Statement of Sister Ann Marie McGloan; the Necrological record prepared by Sister Monica Plante, and the Eulogy by Msgr Brian Sheehan.

CCHA Members earn distinguished awards
December 20, 2017
G.E. Clerk Award: Call for Nominations
December 7, 2017
RECENT BOOKS FROM CCHA MEMBERS
BLURRED NATIONALITIES ACROSS THE NORTH ATLANTIC
Luca Codignola
Long before the mid-nineteenth century, thousands of people were frequently moving between Italy and North America. This work challenges the idea that national origin constitutes the only significant feature of a group’s identity, revealing instead the multifaceted personalities of the people involved in these exchanges.
VATICAN II AND BEYOND
Rosa Bruno-Jofré, Heidi MacDonald and Elizabeth M. Smyth
A look at the impact of Vatican II through the Canadian Religious Conference and the lived experience of two individual sisters: visionary congregational leader Alice Trudeau and social justice activist Mary Alban.
THE CANNY SCOT
Peter Ludlow
This biography brings to life Archbishop James Morrison, a traditional, frugal, and aloof Nova Scotia archbishop who became the ecclesiastical leader of the progressive program of Catholic social action that became known as the “Antigonish Movement.” In so doing, Morrison found himself one of the first to recognize that the Church could offer its adherents more than spiritual guidance.
Go to Top