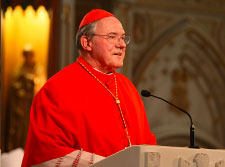 Born in Slovenia, Aloysius Ambrozic came with his family to Canada in 1948. After studies at St Augustine’s Seminary, he was ordained for the Archdiocese of Toronto and pursued a doctorate in Scripture Studies at the University of St Michael’s College. Serving as Dean of SAS, he was selected as archbishop of Toronto and received the red hat in 1998. Having health concerns, he was replaced by Thomas Collins 2006. He was very interested in religious history and was a long-time member of the CCHA.

Bishop Spence was born in Perth ON, and from high school entered the seminary, was ordained as priest in 1950, and completed at doctorate degree in Canon Law from Rome. He was appointed an auxiliary bishop to the Military Vicar in 1967 and bishop of Charlottetown in 1970. In 1982 he became the Military Vicar and Archbishop of Kingston. He liked Canadian church history and was a member of the CCHA for many years.

A native Torontonian, Edwin Platt graduated St Michael’s College School to enter St Augustine’s Seminary to earn his BA degree in 1948 for ordination as a priest. While a parish priest, he supervised the construction of St Thomas More, St John Fisher, and St Luke’s Parishes. After reaching the age of retirement, he continued to preach and to serve parishioners. His humour, sympathy, and wisdom won his many friends and some bridge partners. Father Ed was well loved and fondly remembered by all. He was a twenty-year member of the CCHA.

Florence (Campbell) Fecteau died in her 84th year in Mississauga on Thursday, 29 September 2011. Florence of Cape Breton origin served for many years as secretary for the CCHA and personal assistant to Father Edward Jackman OP before her retirement. She was always willing to help out by typing address labels for CCHA mailings to receiving many visitors and  handling telephone calls to a busy office. Her warmth and graciousness encouraged visitors to the CCHA office for both academic and personal reasons. She was the last of the pre-computer generation of secretaries to work for us. May her personal qualities be well remembered!