President Jacqueline Gresko on Tuesday morning, May 31st welcomed the participants and auditors to Saint Thomas University for the seventy-eighth CCHA Annual Meeting. Edward Jackman OP asked the Lord’s blessing on the conference.

The first session on the Reception of Vatican Two was moderated by Terence Fay SJ.  From interviews with women religious,  Elizabeth Smyth and Patricia Kmiec of the University of Toronto reflected on the renewal of Canadian religious life after Vatican Two and the changing identity of religious sisters. From the lessons of Quebec missionary work, Catherine Foisy of Concordia University recognized that lay workers were essential for the continuation of the work. 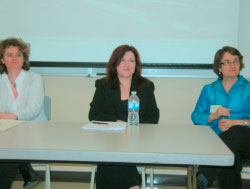 Elizabeth McGahan moderated the second session Commemorating Religious Women. Archivist Patti Bannister related how the Sisters of Charity of Halifax received a national heritage garden for their work in the schools and hospitals in the Maritime Provinces and the founding of Mount Saint Vincent University. Historian Dianne Dodd of Parks Canada explained how women religious communities were in the process of being recognized by their immense contribution from sea to sea to sea. Historian Brigitte Violette of Parks Canada uncovered many sources for analyzing hospital and nursing history in Quebec.

The former African missionary, Edward Jackman OP chaired the session on African Canadian Catholics. Marie-Claire Arseneau of the Atlantic School of Theology from her research unveiled the Africadian Catholics she discovered in  Southville, Nova Scotia. Their roots go back to 1800 but with Acadian help in the 1930s the Africadians constructed their own parish of St Theresa in Southville.

The CCHA annual commemorative Eucharist was celebrated by Bishop Robert Harris of Saint John. A social and dinner followed in the Forest Hills Dining Room of the university. At the dinner, Father Jackman reflected on his missionary experience in Africa and how he learned from the Africans. Editors of Historical Studies, Elizabeth McGahan and Indre Cuplinskas, and president Jacqueline Gresko presented Peter Meehan the Paul Bator Award for the best journal article in 2010-2011. 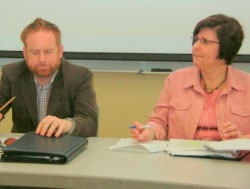 The Conference sessions continued on Wednesday, 1 June, with The Antigonish Movement and Its Legacy. Peter Ludlow of Queen’s University of Belfast demythologized the common perception that Fathers Jimmy Tompkins and Moses Coady were the only drivers of the Antingonish Movement. Ludow showed us that Bishop Morrison, sisters, and the laity also made major contributions to the movement. Archivist Kathleen MacKenzie of St Francis Xavier University revealed the amount of resources which are available on line and in the university archives. 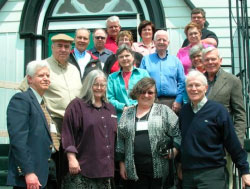 A session on the Social Economy – Reaching Out was moderated by Heidi MacDonald from the University of Lethbridge. Bob McKeon of St Joseph’s College and Deb Schrader of the University of Alberta spoke on Catholic religious orders and the Mennonites engaged in the social economy. Sarah Jardine  of St Paul University examined the Catholic Women’s League of Canada in the 1920s as reaching out to Canadian and immigrant women.

The CCHA members were taken on a tour of St Anthony’s Church, the only wooden Gothic-Style Catholic Church remaining in Fredericton. Parishioner Bob McNeil led the tour and presented the commentary on the history of the parish.

CCHA Members earn distinguished awards
December 20, 2017
G.E. Clerk Award: Call for Nominations
December 7, 2017
RECENT BOOKS FROM CCHA MEMBERS
BLURRED NATIONALITIES ACROSS THE NORTH ATLANTIC
Luca Codignola
Long before the mid-nineteenth century, thousands of people were frequently moving between Italy and North America. This work challenges the idea that national origin constitutes the only significant feature of a group’s identity, revealing instead the multifaceted personalities of the people involved in these exchanges.
VATICAN II AND BEYOND
Rosa Bruno-Jofré, Heidi MacDonald and Elizabeth M. Smyth
A look at the impact of Vatican II through the Canadian Religious Conference and the lived experience of two individual sisters: visionary congregational leader Alice Trudeau and social justice activist Mary Alban.
THE CANNY SCOT
Peter Ludlow
This biography brings to life Archbishop James Morrison, a traditional, frugal, and aloof Nova Scotia archbishop who became the ecclesiastical leader of the progressive program of Catholic social action that became known as the “Antigonish Movement.” In so doing, Morrison found himself one of the first to recognize that the Church could offer its adherents more than spiritual guidance.
Go to Top